Poison Oak, the asshole of the plant world. 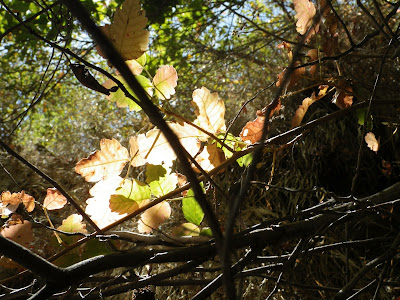 Hate. Despise. Loath. Detest. Abhor.
Find me a better verb because these aren't doing it.
{*With apologies for editorial license, this post gets helpful on paragraph 3}

This plant pisses me off, offends me. It's existence is all the proof I need that there is no God.
The Old Testament God Yahweh was too self-obsessed to be inventive enough to plague mankind with as insipid a plant as poison oak. The New Testament God hasn't shown much interest in the human condition and is probably sending our prayers straight to the big-answering-machine-in-the-sky while vacationing with Aphrodite on the lotus flower reef world of Quonk-6 for the next millennia.

Buddha says all life is suffering, which certainly applies to poison oak. Buddha is usually right about these things. I frequently wonder what Darwin's explanation for how we ended up with a plant like poison oak would be.  Life finds a way. Life always finds a way to fill a niche. And Life doesn't care if you get a rash. It just doesn't give a shit. 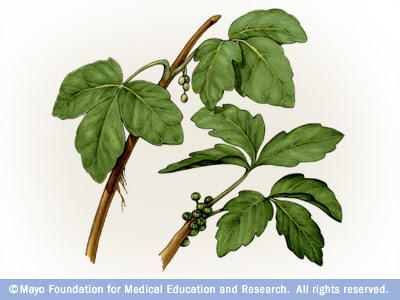 Now that I've stepped on somebody's belief system, lets talk turkey. Poison Oak is a fact of life in our Southern Los Padres (SLP). It inhabits the drainages of our local mountains, sprinkled through the creek beds in a seemingly random way (ever wondered why you see so much poison oak nearer to campgrounds and popular creek areas, but not nearly as much out on the trail?). I have a theory involving coyotes and the god Ah-Puch (Boss of Mintal, or Level 9 of the Mayan underworld.)  In a region full of unpleasant plants, poison oak is the worst (to me). I'd rather get scratched six ways to Sunday than get near the stuff. You may infer from this that I've gone a few rounds with "the oak" and you'd be right. Injected steroids. Oral steroids. Prednisone psychosis syndrome. Benzodiazepines and prescription grade histamine blockers. Antibiotics. Been there probably a couple dozen times. I liken a bad poison oak exposure to an acute case of leprosy garnished with shingles.

The medical term for such an exposure goes like this:
Contact Dermatitis secondary to Poison Oak Exposure
The patient is, at the least, experiencing a moderate rash at the exposure site. My type of reaction to a big dose of the oak is pretty bad news. I don't suffer from full anaphylaxis, but it's close. Of course I get the rash and bubbly eruptions which weep and can lead to cellulitis (skin infection), but the spread and scope of the reaction surpass what would be considered even a bad case. I get it bad.

Somewhere out there somebody has a complete list of every suggested remedy for poison oak. There are a million suggestions, it seems. "Try Formula 409! The chemical burn will make it better!". Sure. Oatmeal compresses. Calamine Lotion. Benadryl Gel. Hot showers. Cold showers. Rubbing alcohol. Sunlight. Ice packs to freeze the epidermis (self-inflicted frost bite). Bath Gin. Vinegar. Mugwart. BBQ lighter fluid. Eye of newt. Toe of frog. I've tried 'em all. Here's what seems to work:
Here's what doesn't work:
So go back up and look at the classical image of poison oak as painted in a "know your backyard plants" book. It shows a brown stem and three big, broad leaves with distinctively bumpy leaf edges. If  poison oak always looked like that it would be a lot easier to avoid, but that wouldn't be any fun then, would it? Right. Didn't think so. Read on friend, it gets worse. 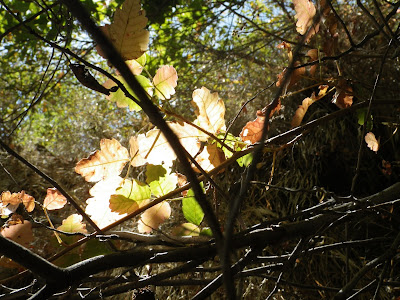 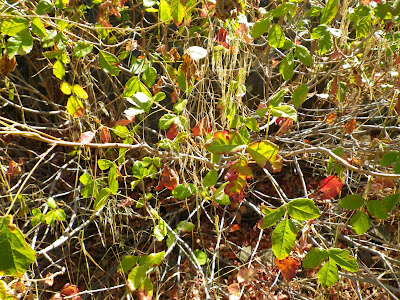 Developing a NORAD quality radar for poison oak takes the sting of experience, and it takes a good set of eyes because the stuff looks different wherever you turn. That's what I really wanted to talk about when I started writing this, the multiple morphologies of poison oak. In spring the leaves are small, clubbed, and venomously oily. In shady conditions these leaves grow rapidly into a kelly-green, broad leafed plant. These plants in the photo above grew exclusively in full sun and I've noticed that in those conditions the oak tends to stay lower to the ground, have smaller and glossier leaves, and are more venomous than their shaded neighbor. They also lose their leaves more quickly in the fall than poison oak which grows in a shadier environment. The vines, in particular, tend to "sweat" more oil in the full heat of day and, as mentioned earlier, leave nasty stripes on the skin that can be very painful when developed. Whatever you do, do not use poison oak as firewood because inhaling the smoke can lead to hospitalization and, in very bad cases, respiratory failure. 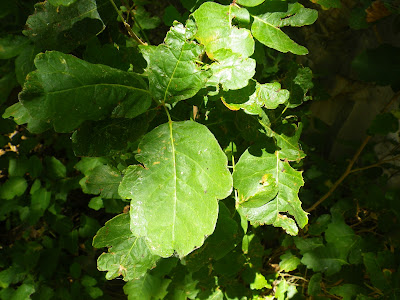 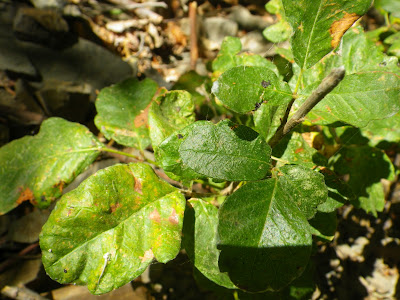 In pictures above you can see that the leaves of poison oak are broader, larger, more full and rounded. They clearly look different than the ones growing in full sunlight. These plants grew in partial to mostly shade. The shaded oak tends to be more viney, creeping up the surrounding plants and hanging from tree branches. It commonly grows in shady places you need to duck through. At face level. It lurks on that shady ledge you just put your hand on. It reaches out from under that fallen tree you ate lunch on. It looks different and acts different from the oak that grows in the sun. Morphology. Multiple shapes. Not cool. Crafty.


As we start rolling into fall the poison oak will fade to a bright red. The leaves will die and fall leaving only the vines. This can be big trouble for people who don't have that poison oak radar. The vines are the worst. They can leave a stripe that spreads like a comets' tail. These "stripes" are often quite painful, not just itchy, but really painful and the skin damage from a real scratch can leave serious scars. If you get poison oak avoid these vines like a zombie with ebola. They're bad news.


In developing that "radar" pay attention in the coming months to the leaves under areas you know from experience to be wooded with poison oak. The fallen leaves of our subject fade from a bright brick red to a sandy beige. As they dry the leaves shrink and become papery, light and crunchy. It's never happened to me but, knowing what an evil plant this is, I wouldn't be surprised if you could get a case of the stuff from laying on long dead poison oak leaves. 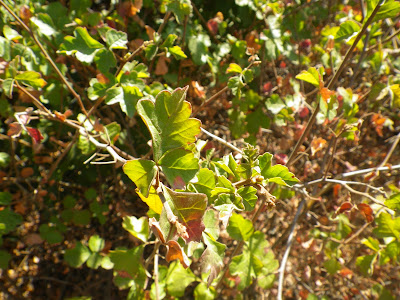 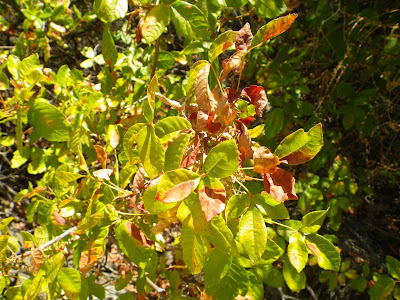 If you are kind-hearted and empathetic you might deduce that I'm currently amid a poison oak crisis. Fortunately that is not the case (thank you if you had been wondering). No, I just happened to have had a discussion some time ago with Nico about the evident differences in the look of poison oak from one canyon to the next. All these photos were taken on the same day up Matilija Canyon. I would be interested in your observations, feel free to share. 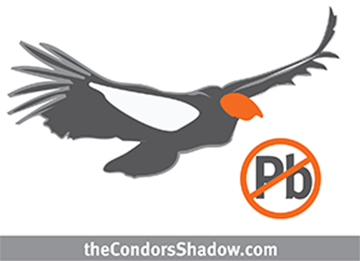 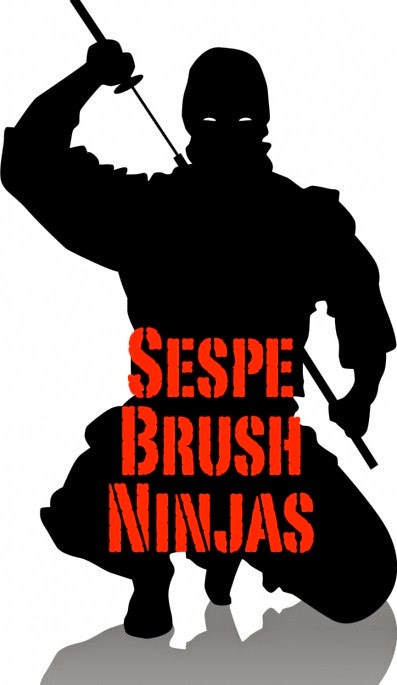